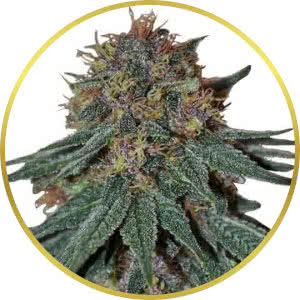 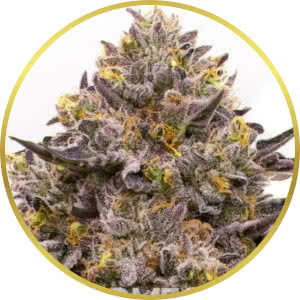 Purple Haze is a psychedelic old-school sativa cross whose frosty leaves and buds turn a deep, dark purple color. The strain is famous across the globe, thanks to the Jimi Hendrix song that shares the same name. Buy Purple Haze feminized seeds today to grow this legendary weed strain. Purple Haze marijuana represents top-quality purps with long, sticky purple buds covered in trichomes and orange hairs. Purple Haze provides creative, euphoric, happy effects, making it an ideal smoke for artists, musicians, or anyone wanting to experience a powerful, psychoactive high. The aroma is sweet, exotic, and tastes fruity like grapes. Up to 20% THC.

Purple Haze (the marijuana strain) mysteriously originated in the hills of the Emerald Triangle. It is believed to be a hybrid of Purple Thai and Haze genetics. The name Purple Haze was originally used to describe a type of LSD sold during the sixties and seventies. According to a 1977 High Times article, it came from the “King of LSD” Owsley Stanley, who created LSD tablets of 270 micrograms called Purple Haze and White Lightning. Later in 1967, the Jimi Hendrix song “Purple Haze” brought the name to audiences worldwide. In an interview before the song’s release, Hendrix said it was “…about a dream I had that I was walking under the sea.”, while biographer Harry Shapiro points out that “Purple Haze” is most likely “a pot-potpourri of ideas” which Hendrix developed over time.

How to Grow Purple Haze

Purple Haze stays shorter than most sativa strains but can still grow into tall plants. It’s a pretty easy strain to grow with high disease resistance. Simply germinate the seeds, provide plenty of water, light, and nutrients then prepare for the stunning purple harvests. Indoors, Purple Haze is finished in 9 to 10 weeks of flowering. Yields are high at over 450 g/m2. Outdoors, Purple Haze is ready to chop by October at the latest.